Mark Murray’s Nike Hercules model triggered a lot of discussion within the club as many of us older guys can recall the missile sites placed around the Chicagoland area. So common a sight that after a while, they were in general ignored.

Aaah the nostalgic smell of fear… it all comes back, now….

Nike missiles were operational during the great era of paranoia, McCarthyism and the “Red Menace,” fear of the atomic bomb, air raid alert exercises in grammar school!

And then there was the Cuban missile crisis. At the height of it, Civil Defense trucks drove through my neighborhood broadcasting, instructing us to be prepared to take shelter in basements or seek protection in hallways away from windows (like that would help living half a mile from O’Hare AP.) Even suggesting covering ourselves with anything including mattresses. And CONLERAD alerts (later changed in ’63 to EBS and what is now known as EAS Emergency Alert System), air raid sirens and bomb shelters…

Today we equate the alert sirens mostly for emergency weather warnings. But I still just think of them as air raid sirens ….

Did I mention the UFO’s? Sighted over DC, killing Mantel in his P-51 in pursuit of silver objects..… the Adamski alien encounters… F-89 Scorpions and F94 Starfire intercepts.. Inspiring Sci Fi flicks like Invaders from Mars, Invasion of the Body Snatchers and This Island earth.

Sci Fi, UFO sightings, the “Red Menace”… Mix in atomic tipped Nike Hercules in the vicinity of Lincoln Park Zoo, as well as farm fields in Libertyville and near where I live in Vernon Hills. I even recall a Nike site backed up to the barn next to a relatives farm we slept in overnight for fishing trips in the late 50’s up in Muskego, WI not too far from Milwaukee.

Well, that was a long time ago and I survived, it didn’t faze me at all… I’m ok. Really!

The above map puts it all in “perspective” as to just how many sites there once were in the Chicagoland area.

At the last meeting there was some discussion about the Chicago Nike sites. Mark Murray had brought a model of a Nike Missile to show and tell.

At the height of the COLD WAR everyone was thinking nuclear war, so in order to protect the major population centers the Nike Missile Defense systems were deployed through the United States. These were to protect us from an attack by Russian bombers. The Chicago Metro area had 22 sites deployed with over 600 Nike Ajax missiles assigned. 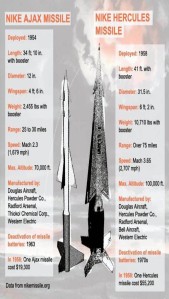 The sites were strategically placed to make the Nike Ajax missiles range over lap. Meaning no area around Chicago would lie  unprotected. The flaw was the missile could not shoot down other missiles and this flaw would in the future render the Nike obsolete.

The lakefront is held in high regard by the citizens of Chicago and Illinois, but it created a Cold War security challenge. A Soviet strike force could fly over the North Pole, across Canada and fly down Lake Michigan without being detected. That is the reason the 3 of the 22 sites would be placed near the lakefront. One missile launch radar site with radar control tower was at Belmont Harbor. Another was at Burnham Park with radar towers at 37th St. The third was at Jackson Park Promontory Point.

Of course this last location was in the news as the local citizenry objected to it being in Hyde Park and near the University of Chicago. Fun fact – Enrico Fermi created the first nuclear reactor under the football stands at the University! There is plenty more on this topic on the internet – a few examples:

What happened to the Nike missile sites around Chicago? – WBEZ 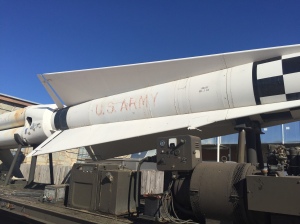 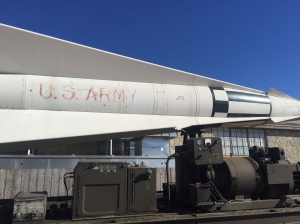