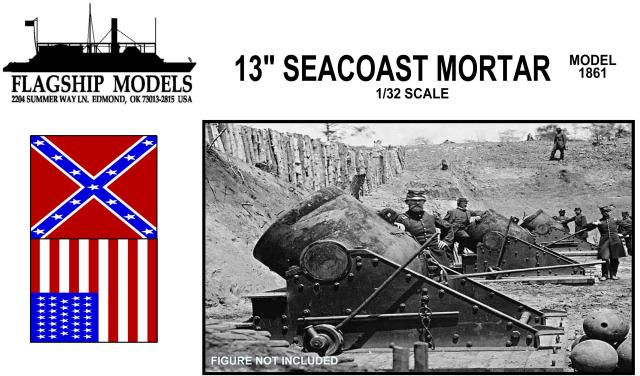 Kit is almost 100% resin except for two or three pieces of brass rod (for levers). Resin parts were so poorly molded, that trying to remove them from the flash resulted in so many broken pieces that I decided to leave them alone and recreate them from brass, using them as patterns. 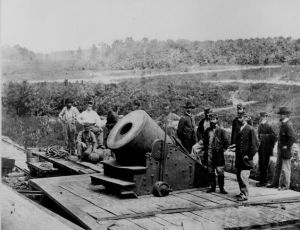 The only resin pieces I kept were the actual cannon mortar, the wheels and the two carriage sides. I kept the cannonballs (molded as one long linked chain) and used them as decoration.

The circular base was made from basswood, then trimmed and sanded into a circular shape which was used on ships to facilitate aiming. The ‘deck’ section was not part of the model, but it was made from thin birch plywood. Both were colored with ‘Minwax ‘Ipswich Pine’ stain.

The fittings and plates on the base were made from .005″ brass sheet,and aged in 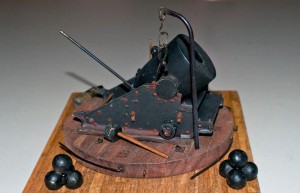 ‘Blacken-It’. The rails were made from sheet and square brass rod and soldered to make rails for the carriage to move on. All the other brass was made from either sheet or rod in appropriate sizes. The straps holding the cannon trunnions were made from brass sheet, drilled and held down with #2-56 hex head bolts after I tapped the holes I drilled in the carriage sides. Cross bars underneath the carriage are also held together with 2-56 bolt and nut and hangar straps for the wheel levers are held on with #1-72 screws and nuts. The loading scoop was made from brass and basswood. The tongs for lifting the ammo were hand made, held together with #0-80 nut & bolt. The ring and hook also hand made. All soldering was done with 60-40 solder. 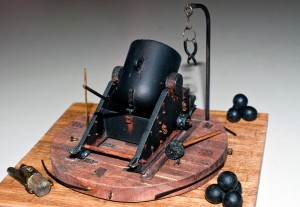 Paint used was Testors Metallizer ‘Burnt Iron’ and ‘rust’ was created with ground chalk pastels and then sprayed with Dullcote.

Overall, the quality of the resin molding of the large parts did not require much cleanup, but any small parts were mostly unusable unless you have extreme patience cutting, sanding, filing away the flash and hoping you don’t destroy the part. 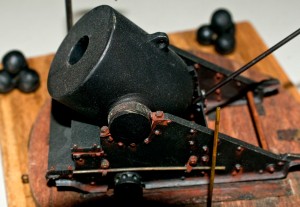 The kit is available in some places online for $50.00 but knowing you’ll have to build all 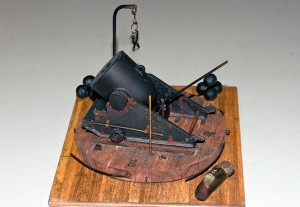 the parts yourself might make you think twice about buying this kit. However, (tooting my own horn here) I think my efforts made it a much better looking model than it if was made as it comes supplied. 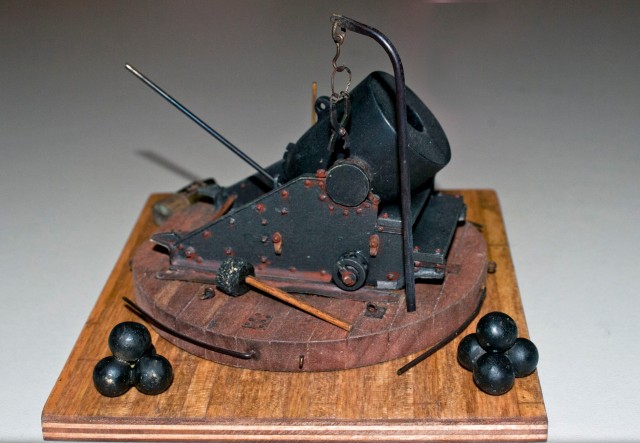 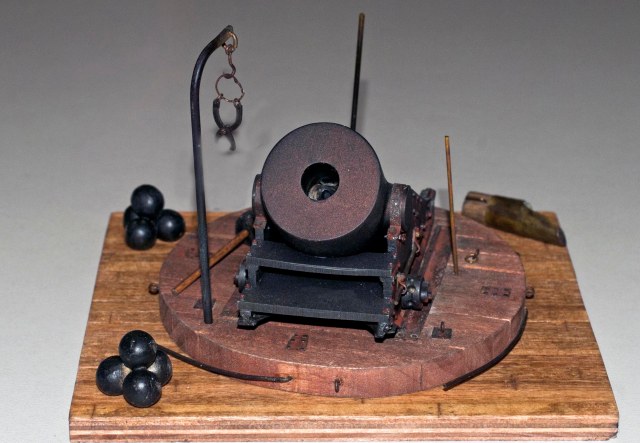 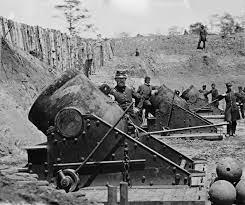 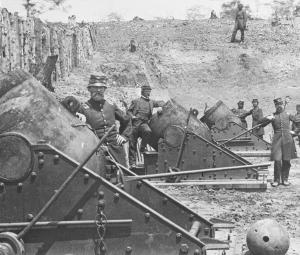