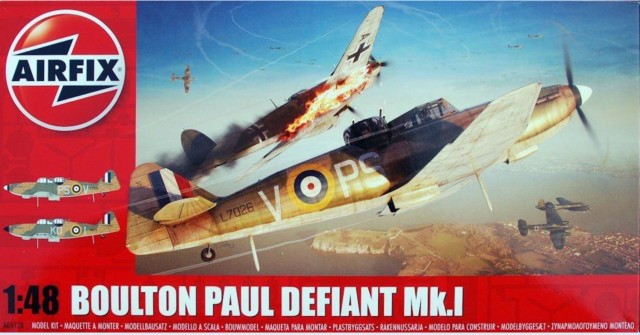 Airfix has been on a roll in the last few years with multiple releases of newly tooled kits in 1/72, 1/48 and 1/24 scale. A most welcome release is the 1/48 Boulton Paul Defiant.

The Defiant was the result of the pre-war belief that heavily armed fighters could intercept enemy bombers successfully. As a result, the Defiant was armed with a fully enclosed turret mounting four .303 caliber machine guns. The Defiant had no forward firing guns. It met with some success early in the Battle of Britain against German bombers, but as soon as the Me-109s and 110s appeared it became apparent that they could not survive the daylight combat environment. They were quickly withdrawn and shifted to night interception and had some success until replaced by dedicated night fighters.

Previously released by Classic Airframes as a limited production kit, the Airfix kit is the first mainstream release of the Defiant. The kit includes markings for two Battle of Britain day fighters, although the kit includes radar antennas and alternate engine exhausts, which indicates that Airfix is planning a night fighter variant. 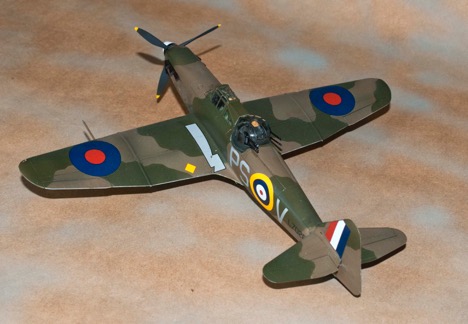 This a thoroughly modern kit, but it does have one major annoyance, Airfix uses numbered call outs for all the paint colors. The actual color is not named in the instructions, but is only identified by number. The numbers correspond to Humbrol paint codes. Here are the most used colors, 78 is British Interior Green, 33 is Matt Black, and 56 is Aluminum. Exterior camouflage colors are identified by name and color patches. 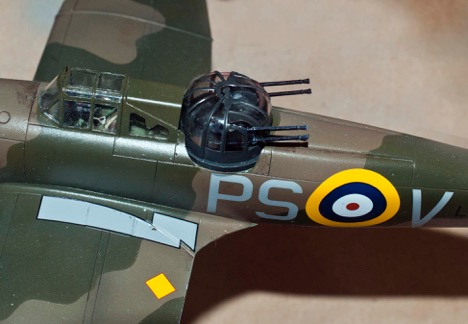 The kit goes together easily, and the instructions contain no surprises. The turret is a multipart assembly that goes together very well. Airfix would have you install the turret after the model is built, but I assembled the lower portion of the turret and installed it before joining the fuselage halves. These parts are predominately black and I diligently painted them in different shades of black and dry-brushed them with an assortment of grays. Once installed, you can see none of it and the completed assembly looks like a manhole cover with a hole in it.

The gun mounts and machine guns were added after the model had been painted and weathered.

The kit’s clear parts have a total of twenty-four separate panes. Thirteen in the main canopy and eleven in the turret, I strongly recommend a set of Eduard canopy masks.

The finished model is striking and makes a welcome addition for anyone wanting a complete Battle of Britain collection.