The De Havilland Corporation needed to re-build the aviation industry in Great Britain after the war. The first advanced turbojet was to be designed as the D.H. 106 Comet in 1946. The first prototype flew on July 27, 1949. The Comet entered service with B.O.A.C. in May 1952, becoming the world’s first jet passenger aircraft. With an improved Comet 2, orders from airlines from around the world increased until 2 B.O.A.C. Comet 1’s crashed in January and April in 1954. The cause was metal fatigue do to the pressurization and depressurization cycles that the plane endured. It was a new technology that included how metals would be affected by these cycles. Redesigned as the Comet 4, B.O.A.C. ordered in quantity. The Comet 4B also got orders from B.E.A. (British European Airways). The 4B’s were used by Dan Air till 1970. The British AEW Nimrod developed by Hawker Siddeley, was a highly modified Comet 4B

This was another Airfix kit with a lot of flash on most parts. The first thing I did was put the fuselage and wings together with tape to see if I had to add any weights to the nose to keep it from being a tail sitter. Since the wing is large and sits about the middle of the fuselage, no weight needed to be added, 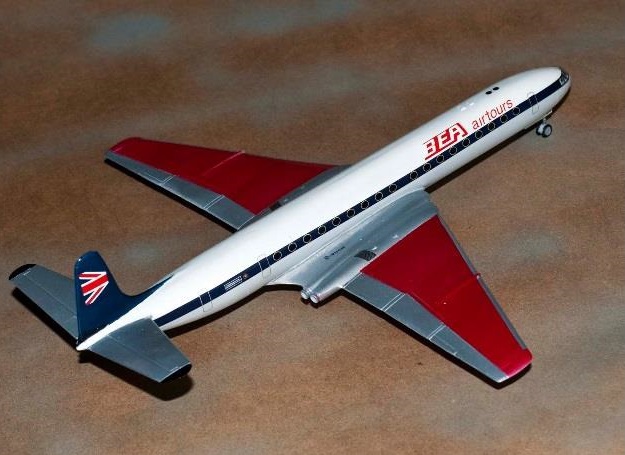 Next was to tackle the wings. Just two pieces comprised the wing assembly. These were glued together and then sanded to get rid of the flash on the leading and trailing edges. I then glued the four exhaust nozzles at the rear of the engine outtakes. I drill out some of the exhaust stacks, as a solid piece would look kind of funny. After I assembled the wings and took a look at the engine in takes, something was missing. The 4 intakes looked like big gaping holes and something had to be done to make them look better. 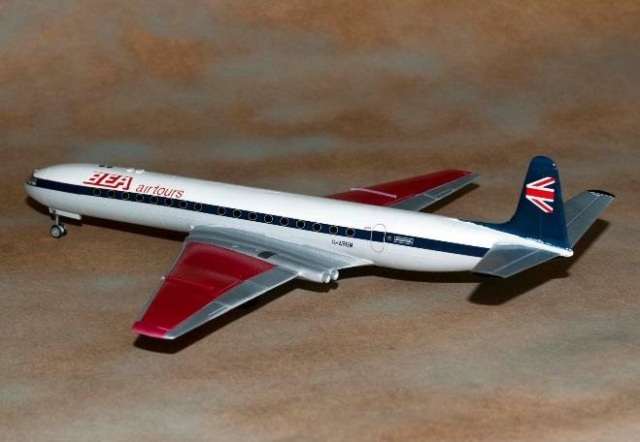 Since the intakes are oval in shape I found some 3/16″ brass tubing that I thought would work. I cut some pieces about 3/8″ long. Then I used a vise to squeeze them to an oval shape. They happen to fit just right into the intakes. But I had to cut some of the brass tubing at an angle to make them fit better. After gluing these pieces in place, I added putty and sanded to smooth out the intakes. This makes the intakes a lot nicer.

The wing is one assembly and glued to the fuselage nicely. Very little filling was done and since the gaps were small I used Elmer’s glue. I applied several layers in the seam and a wet Q-tip help smooth out the glue. 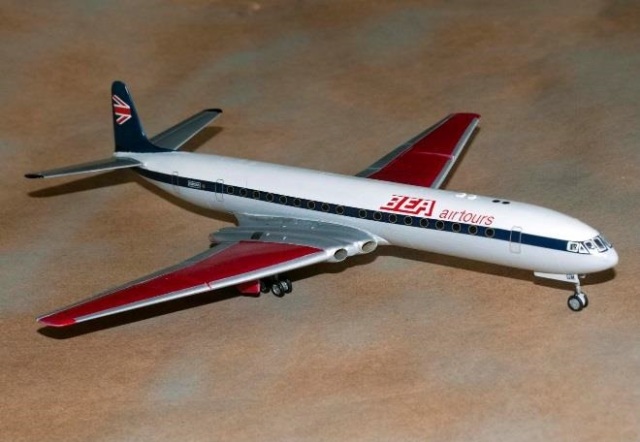 I used Tamiya primer out of a rattle can. This primer gives the plastic a good base for using acrylic paint. The aircraft was painted in the following sequence, the entire fuselage was painted Gloss White, after each coat I let it sit for an entire day before adding the next coat. The fuselage was taped off and the bottom was painted Light Ghost Gray. The entire fuselage was then masked and Model Master Aluminum was used on the leading edges, the engine nacelles and the horizontal elevators. After leaving this coat of paint sit for two days, the leading edges and nacelles were masked off and Clear Red was applied the wings and Midnight Blue to the edges of the horizontal elevators.

I then applied a couple of coats of Future before laying down the decals. They went on easily; the windows were all one piece decals. A final coat of Future was applied to seal the decals. There was no silvering at all with these decals.

Another day or two till everything dried and then I worked on the undercarriage and wheel assemblies. Five pieces were used for each bogey, plus the wheel well door.

Model Master Acrylic paints were used, except for the Primer and Aluminum.

Overall it was a nice kit to put together and another addition to my collection of 1/144 scale planes. 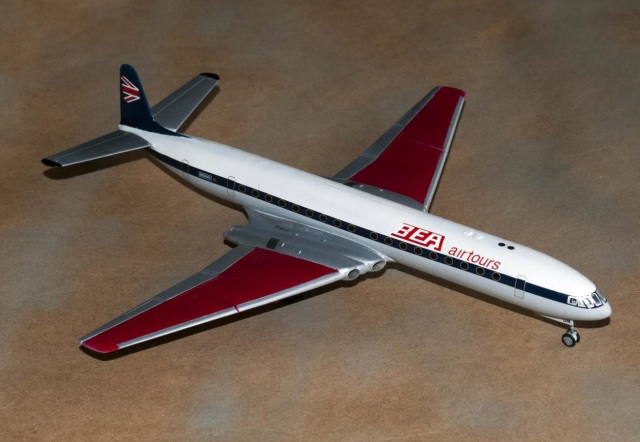