There was discussion about the new meeting schedule for the rest of this year and 2016. Meetings in Aug. 2015 and Sept.2015 are only 2 weeks apart. The meeting in October is scheduled for a Saturday.

Dan Paulien brought up the idea that since this meeting will have a longer run time, maybe we can have a long demo or a couple of short ones. Also in 2016, the meeting between Mar 2016 and April 2016 will only be 2 weeks. There is no meeting date for May 2016. Then the July 2016 and Aug 2016 meetings will be 7 weeks apart. Discussion on this was tabled to the next meeting.

The theme for this month’s meeting was Bare Metal aircraft. There were approximately 18 models on display.

Paul Gasiorowski: F-84G, Heller, 1/72; Out of the box build. Tamiya primer and MMaster Aluminum Spray can. Tamiya tape before the primer to get various shades of aluminum. Very little sanding was needed. The wings and horizontal stabilizer were not glued to the fuselage, as the fit was tight. Nice easy build for the theme night.

Ford Tri-motor, Monogram 1/67; Truly OOB. Since the Ford Tri-motors were not painted, since it was an aluminum alloy. I just built this OOB, except for some painting of the engine cylinders. Some decals were added. This was probably a good example on how a kid in the fifties or early sixties would have built it.

USAF NT-43A, Highly Modified Airfix B737-200, 1/72; Built as a one off from a picture I received from the TICK. The platform was used primarily for radar work in conjunction with the stealth programs. The only modification were extended nose and tail radomes. There will be a review posted on the new web site of this build.

Brian Gardner. P-36, Amt/Monogram, 1/48. Modified kit to show what the actual P-36 was like before a kit was available. He used a cowling from an AMT P-36, engine from a Monogram P-40, and prop from a Mono- gram Wildcat. He finished the model and HobbyCraft released the same version.

John Koziol Jr. An update on the Merlin Engine project in 1/24 scale. Also a 1/24 Zero Project engine made of different metals.

Glenn Estrey; P-51B Mustang, Tamiya, 1/48, entire plane in Bare Metal Aluminum sheets of different hues. OOB Decals were from a different source. He suggested building this if you want to suffer a lot of pain.

Steve Kumamoto; Convair XP-81, Anigram, 1/72, Kit was a final version of the turboprop model. Steve wanted to build the original version. He had to cut down the nose and add a Hasegawa P-51D Mustang nose, just like they did at Convair. He also had to build a higher fin insert, ventral fin and scratch build the oil cooler.

North American RB-45C, Mach 2, 1/72 OOB. A tail sitter, Steve had to add so much weight to the nose that the original landing gear could not support it and broke. He had to re-drill the struts and add stiff wire .040 into the body of the plane to get it to sit correctly. Used Platinum Mist paint as the base coat. 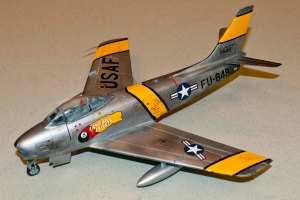 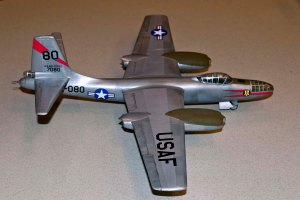 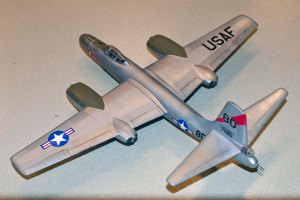 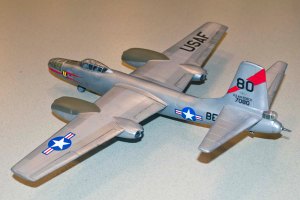 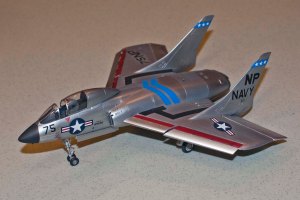 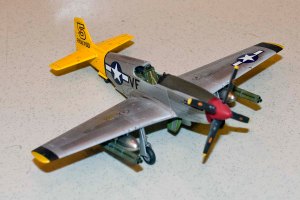 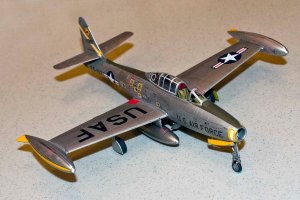 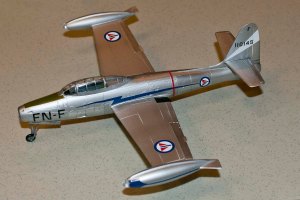 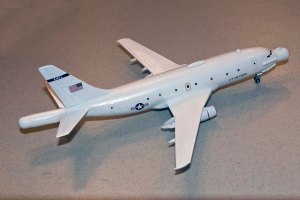 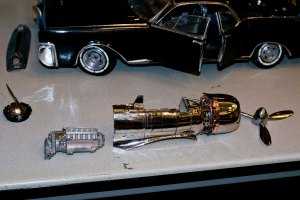 Dan Paulien did the “honors” with a “hands on” demo for applying metal paint with an airbrush. He covered masking techniques and surface preparation. Tips included masking for various shades of metal finish. Paints demo’d were Model master Metalizer and Alclad II. 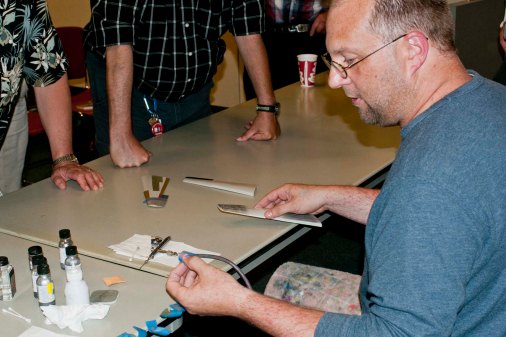 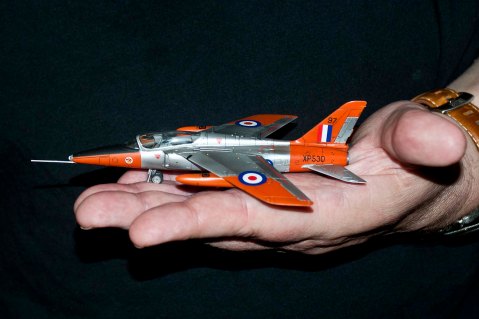 Like Loading...
This entry was posted in Meetings, Recaps and Photos, Themes and Programs. Bookmark the permalink.