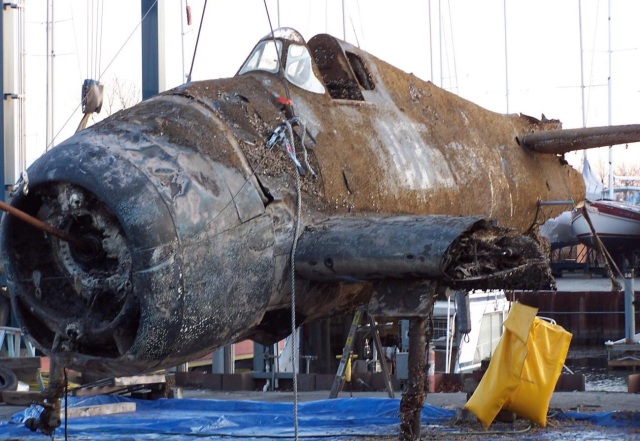 Article and images by Lee Lygiros

Friday after Thanksgiving a friend of mine sent me an e-mail of a Tribune article regarding a Hellcat that was being fished out of Lake Michigan. It had already been pulled from the bottom, 250 feet below the surface, off the Michigan shore and was towed underwater across the lake to Waukegan Harbor, where it would sit until Monday when they would put it on a flatbed to be taken somewhere for restoration. I thought “what a perfect opportunity”, since I lived 10 minutes away and decided to take my sons there to take a look at the Hellcat the next day.

On Saturday we arrived at the harbor and spent about an hour looking for the Hellcat. I expected it to be easy to find, being the only mud covered warbird on a barge, but after combing the whole harbor and being unable to find it, I finally found someone to ask. It turns out that when they said that the aircraft was in Waukegan harbor, they really meant IN Waukegan harbor. The only thing visible was two yellow floatation bags tied to a couple of lines that presumably ended at an F6F that was sitting in the mud of the harbor. Closer inspection showed an outline of something, a tail, a canopy frame, something unidentifiable in the waning light of the day. A couple of drops of oil “rainbowed” the surface of the water.

Not happy with what we saw, I figured that they had to pull this thing out sometime soon and that I wanted to be there when they did it. I asked the guy who showed me the flotation bags if he had any idea when the airplane was going to be pulled and he said “Monday at 10:30”. I was working that day, but I figured that even if I got there by 3:30 there’d still be something to see.

Lt. (j.g.) Walter B. Elcock had taken off from Glenview NAS for practice carrier landings in Hellcat BuNo 25910, an aircraft with a combat history from Guadalcanal. USS Sable, a Great Lakes sidewheeler converted into an aircraft carrier was steaming up and down the Michigan shore awaiting students doing their carquals. He made the trap, but was off center and his airplane ended up hanging off the side of the ship, kept in place only by his tailhook. Before he could get out, the cable snapped and he went into the drink. He wasn’t in there too long though; a johnboat that trailed the Sable just for this purpose pulled him out of the water before he was in it even a minute. His airplane sank in 250 feet of water (no big deal, they were cranking them out by the bucket load back then—besides, it was old), and he went on to a normal Navy career.

I went to Waukegan Harbor straight from work, getting there around 3:30, expecting to find the Hellcat sitting on a trailer and ready to head south. But even though they’d been working on it for the last 5 hours, they weren’t anywhere near ready to leave. She was hanging from a crane, having been pulled from the harbor. I figured “great. Got time to go home and get a camera and the boys.”

I came back about a half hour later, and, on the basis that it’s easier to get forgiveness than permission, walked over the “Official, Authorized Persons Only” tape to take a closer look. The Hellcat was still hanging in its harness. Zebra mussels covered the sides except where some workers had cleared them off by the bureau number and insignia. The paintjob itself looked more worn off than faded, and two sets of markings could be seen through it. The engine wasn’t visible since the cowling was packed with Lake Michigan mud that one worker was trying to scoop out with a steel rod and the whole cowling was canted down a little bit from centerline, most likely a result of it’s impact with the lake bottom when it sank. Landing gear and tail hook were extended. The tires were missing and the brakes were visible, but the oleos extended and compressed as if they were serviced yesterday. The wings could still be folded up by hand. Many of the moving parts still moved and the grease on them was moist. The wings weren’t intact. One was broken just outside of the hinges and the other one was missing at least six feet. The rudder was gone and there was only one elevator left, a skeletal remnant of its former self. The prop and canopy were missing, although the windscreen was mostly still there and the side windows aft of the canopy were broken. The whole thing smelled like a healthy aquarium.

The workers took the wings off, a seemingly easy operation as the knuckle pins slid right out, and they put the outboard wing sections over to one side which allowed me to take a closer look. Both sections were missing their outboard portions, presumably damaged when the bird went over the side. The inside of the pivot points were as shiny as the day they were manufactured. Rust was nonexistent. I took some grease off of the pivot point and smeared it inside the pocket of my flight jacket so that I could always carry a part of 1945 with me. Both wings had the machine gun holes faired over, but one of the fairings was open. Looking inside revealed several unfortunate fish still flopping around in their formerly secure home.

As they wrestled the airplane onto the semi trailer, I got a chance to talk to the driver who would take the airplane away. The whole salvage operation was financed by Enterprise Rent-A-Car. The current owner, the grandson of the company’s founder, was saving and restoring this aircraft in honor of grandpa’s service on the Enterprise in WWII. The restoration would take place in Pensacola, but the final destination of the airplane remains unknown. News reports stated that it would go to “a museum”, but the truck driver was pretty sure it would end up on display at Enterprise’s headquarters in St. Louis. In any event, it would be a static display, but from what I saw, there was more than enough left of this old bird to restore it to full flying condition. It’s certainly in better shape than the flattened Glacier Gal was when they dug her out of the ice in Greenland.

The driver does this sort of thing for a living so he’s familiar with all sorts of airplane wrecks. I mentioned the fact that the Hellcat smelled like a lake right now, but with several hundred pounds of zebra mussels, dead fish and lake mud it must start to get kind of gamey at some point. He said “oh yeah. I expect that somewhere around central Georgia, once it starts fermenting in the sun it’s gonna get pretty ripe. But once we get in Pensacola they’ll take a fire hose to her and blow out all the mud and other stuff. That’s the first thing they do with every wreck we bring to them.”

Having taken all the pictures I could, I took one last look at the Hellcat in the dark, experiencing its first dry night in almost 45 years. For something so rare, historically significant and easy to get to there were surprisingly few onlookers not involved with the recovery effort. Besides myself and my sons there were only about a half dozen other people, including a couple of men who were old enough to obviously be veterans. Earlier in the day, the grandson of the last pilot of this airplane showed up and they let him sit in the cockpit. Some news crews were there earlier too. But overall turnout was practically nonexistent. No matter. My sons and I experienced a piece of history that you usually have to travel to remote locations to experience. And we did it all in Waukegan. 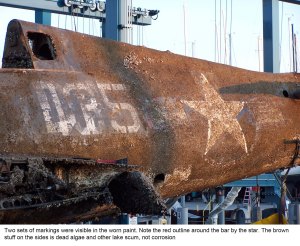 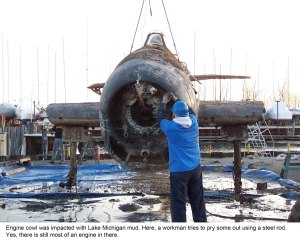 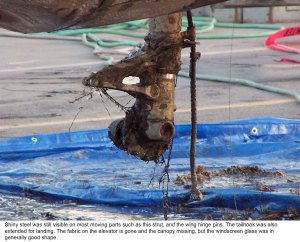 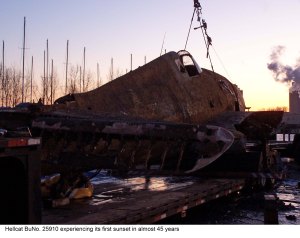